Can breastfeeding affect your sex life? 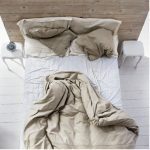 In the initial period after giving birth, sex tends not to be a top priority. Slowly, as you start to feel less ‘delicate’, and days become distinguishable from nights again, it creeps back up the agenda, and by 6-12 weeks, most women have recommenced intimate relations. The speed with which you get back to sex may be influenced by the way in which you feed your baby, however: there is evidence that if women formula feed, they may be up for it significantly sooner than if they breastfeed1.

Determining how exactly breastfeeding affects a mother’s sex life is a complicated business. The body of scientific literature looking at this issue spans several decades, and whilst it contains some interesting observations, it is also littered with apparently contradictory results. In their 1966 work, ‘Human Sexual Response,’ William Masters and Virginia Johnson reported that all 24 of the breastfeeding women they studied experienced ‘enhanced sexuality’ compared to non-nursing mothers. This result does appear to be something of an anomaly, however; whilst it is certainly not the case that all breastfeeding women experience a pronounced drop in libido, there is a tendency for them to be less interested in sex, and less likely to engage in it than formula feeders.

Of five studies comparing the sexual experiences of breast feeding and formula feeding women, one reported that feeding method did not appear to make any difference2. The remaining four found that breastfeeding mothers were less interested in having sex3,4, less likely to be having it1,3, and more likely to find it painful when they did5.

A study that monitored women during the weaning process also suggests nursing may suppress sexual activity6. Mothers who had been breastfeeding for at least 6 months completed a daily questionnaire about their health and how they were feeling until a month after they had weaned their babies. The responses they gave in the 4 weeks before weaning were then compared with their responses in the 4 weeks after.

Within 3-4 weeks of stopping breastfeeding, the mothers in the study reported a significant increase in sexual activity. They also reported an improvement in mood and a decline in fatigue, and the authors suggest that this may in part explain the women’s increased appetite for sex. Other research has reported that the lower sex drive of breastfeeding women exists irrespective of tiredness or depression, however, so it is likely that there are other factors underlying the issue4.

One potential culprit is the differing hormone levels that occur in women who are nursing. High prolactin and low oestrogen levels are thought to reduce vaginal lubrication, and as these hormone levels are frequently found in breastfeeding mothers, the theory goes that this may in turn reduce their sexual activity1. Although this is a reasonable hypothesis, a direct link between prolactin/oestrogen levels and lower sexual desire in breastfeeding women has yet to be demonstrated: in a study monitoring levels of these hormones directly, no correlation was found between the two7. The study did find a relationship between very low levels of the sex hormones testosterone and androstenedione and ‘a severe reduction in sexual interest’, which affected five women in the breastfeeding group in the study, and none in the formula feeding group. It is important to point out, however, that the formula group was much smaller (14 breastfeeders were compared with only 6 formula feeders), so while the results indicate that breastfeeding may result in lower levels of these hormones, they don’t provide conclusive proof.

An alternative explanation is that breastfeeding women may be less interested in sex as they have an ‘intimate touching need’ satisfied by nursing, and are therefore less likely to seek its fulfilment through sex1. Again, however, this is speculation: it’s possible it may have an impact in some relationships, but it has not been evaluated scientifically.

So far, the research looking at the relationship between breastfeeding and sex hasn’t provided any clear answers. There is evidence that breastfeeding women are more likely to report a lack of interest in sex, or find it less comfortable, but this is not something that affects nursing mothers across the board – many report enjoying sex, and some have even said that their sexual relationship during this period is better than before they gave birth8! Whether this because of, or in spite of breastfeeding is impossible to know, but it indicates that nursing your baby will not necessarily condemn you to a poor sex life. Having said that, the libido of some mothers does appear to be seriously diminished during breastfeeding. The reason for this isn’t clear, but it could be because these women are experiencing particularly low levels of certain sex hormones.

If you do find sex particularly unappealing while you’re breastfeeding, the good news is that it doesn’t appear to last forever. A large study found that although breastfeeding women reported less interest in sex than formula feeders to start with, this difference had disappeared by 12 months4, so however long you intend to breastfeed, it seems your shouldn’t have to wait more than a year for your libido to get back to normal.